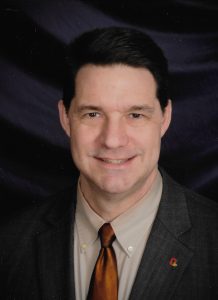 Dr. Tom Nye graduated from The Ohio State University College of Optometry in 1987, and joined our practice soon after. As an optometrist, Dr. Nye offers to the practice all facets of primary eyecare. This includes vision evaluation and correction, contact lens care, treatment of eye disease, emergency services, and surgical co-management.

Dr. Nye was appointed by Governor John Kasich to the newly-created Ohio Vision Professionals Board in 2018. The 7-member board is now the licensing and regulatory board for optometry and opticianry, and is charged with protecting the welfare of the citizens of Ohio relative to their eyecare needs. He is currently the president of the Board, and is only member of this statewide board from the southern half of Ohio. Dr. Nye was previously a member of the State Board of Optometry for over five years, after originally being appointed by the governor in 2012, and was elected president of that board in 2016.

In 1991, Dr. Nye was named Ohio’s “Young Optometrist of the Year” for his outstanding professional and community service. The Ohio Optometric Association, which represents nearly 1100 eye doctors throughout the state, also recognized Dr. Nye as the “Key Optometrist of the Year” in 2006. In presenting this honor, the OOA noted his outstanding contributions to the profession of optometry, specifically his legislative efforts on behalf of patients and the profession at the state and national levels.

Dr. Nye works closely with elected officials relative to vision and eye health issues. Currently, he is an OOA keyperson for State Representative Sarah Carruthers. Over the years, he has also been an optometric keyperson for various other state leaders, and for Speaker of the House John Boehner.

In addition to these grassroots efforts, Dr. Nye has been a member of the American Optometric Association Political Action Committee Board of Directors, and was treasurer for that group. He is also the TriState Administrator and Medical Director for Vision Source, a professional network of over 3500 private optometric practices across the country.

Locally, Dr Nye currently serves as trustee of the Fraternal Order of Police Associates, is a Board Member for Historic Hamilton, and treasurer of the Dayton Lane Historic Area. Dr. Nye has served on various other boards and committee in and around the city, and is also former mayor of Hamilton.

Dr. Nye and his wife, Jennifer, reside in Hamilton. Their daughter Bethany and her husband Ben live in Hamilton’s Highland Park neighborhood, and they are expecting twin daughters in the summer of 2020. Their son Matthew is a graduate of The Ohio State University, and is a chemist in Delaware Ohio. Their youngest son Michael is completing his double major in physics and electrical engineering at The Ohio State University.

“Working on my computer all day used to drive me crazy. Jessica at Vision Source Hamilton helped me understand what glasses would be best for me at the office...and they even block the harmful blue light from my computer. Thanks!”

You can schedule your next eye exam with us online!